It was 8.00 am in the morning on a sunny and warm Saturday when a white mini-van stopped next to us.  I had been waiting at the bus stop along with my younger cousin Tariq, he was 13 and I was a skinny looking 17 year old.  My golden round-rimmed glasses added to my nerdish look, while the ‘Flat-Top’ hair style I sported at the time –For those of you born in the 90s, you are forgiven for not knowing what a Flat Top was – what was my attempt to look cool, or so I believed.  The door of the van slid open, a Filipino yelled our names and we jumped in the van in a hurry.  This would be both, my-self and Tariq’s first ‘real’ job during summer break before going back to school.  It was real, because we actually got paid quite well for it.  The pay was 700 Dirhams a month.  I was anxious and excited and hardly got any sleep because it was my first summer job.

I realise that many of you had their summer jobs at a much earlier age.  I never did.  And quite frankly, I never really had to take on any summer jobs before this.  We had our parents, my father tried once to get me in a summer camp.  I relentlessly refused and argued that I would rather spend it indoors with the rest of the boys playing video games.  He yielded.  That was then.  He had passed away by the end of 1994. This was the summer of 95 and one of my uncles thought a summer job would be a good idea for me to earn some money, gain a bit of experience and most importantly keep me busy after the passing of my father.

The job was in a secluded warehouse in Dubai.  We worked from 9 am to 6 pm inside the warehouse along with a small group of talkative and charming workers from Tanzania, Philippines, India and an Arab.  We worked, joked a lot and broke bread together trying out food from Philippines (I recall the Lapu Lapu steamed fish and white rice), the Swahili beans and Chapatti and different Indian curries.  This wasn’t a buffet, each one of the workers would take turns every day to cook in the warehouse’s kitchen.  Most of the days, we would just stay hungry and skip lunch because it was too busy.

Fast forward 2 years later, here I am anxious again ahead of my first day at work.  This time more than anxious, I feel extremely uncomfortable. It had been a year since I graduated from school and my search for jobs was not bearing any fruit.  So when the opportunity for a short one month stint was offered to me, I accepted it.  The only thing was I was going to be part of a staged ‘Magic Show’ which would be followed by a daily raffle draw.  It was part of the Dubai Shopping Festival which had just been launched.  I would play the role of the ‘Magician’ and Host–Yes, that’s right a Magician- in a crowded yet small Shopping Centre somewhere in Deira Souq.  Flanked by 2 young Sri-Lankan ladies who would play the role of my assistants, my job was to entertain, host and convince as many of the audience members to take part of the raffle draw.  It took me some time to get out of my shell.  It took me a longer time to stop feeling embarrassed of the Shiny Red Waist-Coat and the ridiculous Magician Hat I wore throughout that month.  It was only a matter of time till I found myself learning to adopt an ‘alter-ego’ and fit in the role of a loud, charming and funny entertainer.  A far cry from the shy, awkward introvert I was.  For those of you laughing, I got paid a cool 150 Dirhams a day plus tips for my work.  Not bad at the time for a jobless 19 year old.

I would in the future be pushed out of my comfort zone, and thrown in the deep working as a salesman for a Timeshare company.  I learnt what it felt like pitching to customers; I learnt how it felt being rejected continuously on every evening and how it frustrated me and my best friend because our salaries would only be paid if we closed a deal.  I also learnt how growing a ‘thick-skin’ would help me look past every ‘No’ I get.  I experienced what is known as ‘camaraderie’, going through good and bad days with a team despite the fact we came from different cultures.   I also had a taste of the the rush of closing a deal, and got to understand what it took to win a customer’s trust.

week in a 2 day closed event, I warned them that “the most dangerous place for our youth to get used to living, is in their comfort zones”.  I emphasized that as Educators, they should try and encourage school students to embrace the joy of exploring new experiences that would contribute towards developing their characters.  I believe it is such a momentous loss of opportunity if we allow our youth at a young age to limit their aspirations to settling for what is the norm and the standard, thus settling for a “a life less than what they are capable of living” as the late Nelson Mandela had put it.  We tend to forget that everyone we know in who has achieved amazing success our world today has done so stepping out of their comfort zones, and embracing the unknown.

There are consequences for not allowing our youth to experience stepping out of their comfort zones by protecting them or even worse stand in their way by encouraging them to “do what everyone else is and has been doing”.  For example, some of these consequences are:

Looking back, It’s because of these reasons and what I have personally learned working in 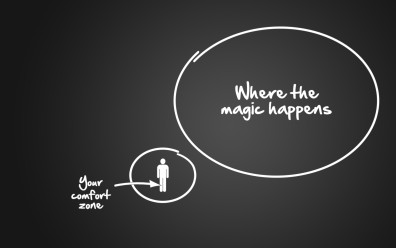 an early age and being thrown in the deep is why me and my partners recently launched the ‘UAEtopia Talent Mine Initiative’ and have been having numerous conversations with schools, employers and other public institutions to encourage them to offer youth opportunities to rub shoulders with the real world.